In recent years, PE lines keep on evolving by accepted mutiple fishing style because they have many benefits.

Spent a lot of time on reserch and development in line manufacturers for meeting the needs kind of strength, elongation, specific gravity, material, texture that anglers have.

But, since it is a consumable item, its initial performance will be lost after long-term use.

Cast ability is most obiously decrease in initial performance.

I guess almost users can feel it.

When using a new PE line, the line will smoothly pass through the guide and the lure will fly far away comfortably.

However, the cast feeling gets worse every time I go fishing 3 times and 4 times.…

The cause is that the coating for water-repellency on surface of the PE line gradually get off by casting, , and the gaps between the fibers are flooded.

The PE line itself becomes heavy, which leads to a decrease in flight distance.

In additon, the getting off of the coating also affects the durability (discoloration and fluffing of fibers).

then, what I want to tell you is…

Sunline`s new product『POWER UP LINE COAT Speed Dry』can greatly solve the all problems you have.

Previously, we also released a product called Power Up Line Coat. And now, many manufacturers have released coating agents for lines.

It can be said that it is the ” Red ocean of line coating agents”.

Sunline has spent five years developing, it is improved since the previous one and using environmentally friendly ingredients make differentiation from other products.

We can say with confidence this is amazing product.

Fluorine oil is widely used as an ingredient with excellent water resistant, oil repellency, and slipperiness.

Sunline has developed a fluorine-free water repellent for reducing the environmental burden.

Please check the graph and image about Water-repellency below. 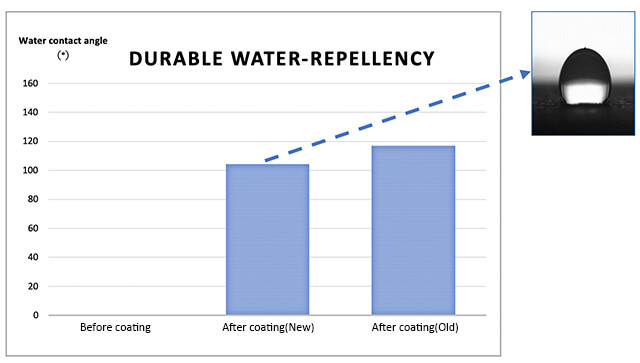 By adopting selected silicone, we have achieved high water repellency exceeding 100° while being fluorine-free.

Furthermore, we succeeded in eliminaing the unevenness of the coating, which was difficult with the old line coat.

The improved permeability of the active ingredient can coat even the threads inside the spool. 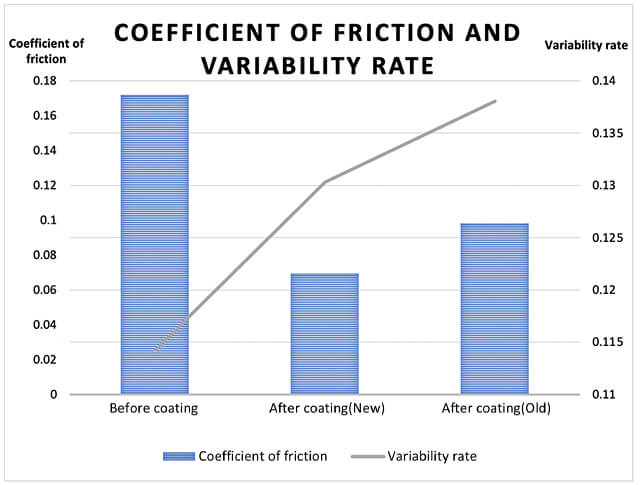 【Designed for user and the environment】

Efforts to environmental issues that have become more common than before due to activities such as the SDGs.

Fishing is only possible if there is a wonderful environment of nature and living things.

Sunline is committed to manufacturing with less environmental burden.

Only two types of raw materials are used, “silicone oil” and “alcohol”, which are highly safe and are also used as additives for cosmetics, foods and chemicals.

It uses a highly volatile alcohol solvent and can be used in about 15 to 20 minutes after coating.

Only silicone remains when dried. It is kind to both the earth and people.